There is some dispute about how we met; but Hera has had so many other adventures that the one she had with me is probably in the shade, so I reckon we go with my version.

Checking in for a flight in Singapore, something makes me glance down to see what this blondie has on her feet and I notice a particular type of shoe: flat soled for easy walking, but still with metal cleats to clip into pedals – bike touring shoes. Otherwise she’s got the south east Asian travelers uniform of happy pants, natural-dyed singlet and suntan that makes it look like she might have been on a yoga retreat.

‘Are you bike touring?’ I say.

She looks at me a bit surprised. ‘How did you know’ A Dutch accent for sure.

‘I’m psychic’ I say. Then point at her shoes. ‘Have you got the Rohlof hub yet?’ Surprisingly I don’t dominate quiz nights; I should because of my tendency to absorb little trinkets of knowledge. I guess it helps me blend in. Somehow, I knew that a lot of bike tourers had switched to this internally geared hub because of its reliability and low maintenance.

Later than morning as I’m wandering the airport I see her surrounded by four giant American college students, full of confidence and laying it on thick; making a play for the pretty little Dutch girl. She likes the wide-open spaces, Hera and gets crowded by people very easily. I know this now after seven years of friendship, but she greets me like it’s already 2017 and grabs my arm. Rescued by the passing Aussie. We walk off leaving four ivy league boys scratching their heads and just beginning to discover that they don’t, actually, rule the world.

She was in the middle of a 6-month solo journey through SE Asia. I remembered how I’d been adopted by people of more means than I when my travels were more intrepid. So it was good to be able to return the favor. Hera stayed with us, let me help her fix her bike, slept off the flu that she’d picked up in Singapore and re-built her energy on Ubud’s glorious food.

I’ve got this theory that travel acts as a filter. So when you wander far from home and your path crosses with someone else who’s doing the same, then it’s inevitable you’d have a lot in common because of all of choices that make you who you are – also brought you right here. It’s enough to make you believe in past lives sometimes because Hera and I just looked at each other early on and thought ‘you again huh?’. We cruised the back streets on a scooter, walked the rice paddies and crawled cafes; talking about our lives as if we were giving each other an update and hadn’t just met for the first time.

For same reason I struggled to take a decent picture of her though. I produced flat, stale shot after another and at one-point Jez said, ‘hey you managed to make her look bad – that’s quite a feat’. But then one afternoon the light was just so, she looked straight into the lens; and out came the picture you see at the top. With those fearless eyes.

Fearless. She’s a vocalist who’s performed in musical theatre back in Holland and taught singing to pay the bills. I talk for a living, so I asked for some tips on using my voice better. She showed me a trick to keep the voice box more open between sentences. Constricting the throat is a protective reflex so in a way she was teaching me to apply courage in the moment. Becoming less guarded in front of a group of people is a way to make the message really ‘sing’, so I’ve been practicing it ever since.  It’s about having the courage to get out of the way, make yourself small and let the story speak for itself. To have real respect for an audience, viewership or readership.

We’ve stayed in touch over the years, sharing lost loves and life’s ups and downs over cyberspace. Early this year I’d rolled over in the middle of the night and out of bad habit checked my phone. There was a message from Hera. She was sitting in a little cantina near the tip of the Baja peninsula in Mexico, eating an ice-cream and trying to write a speech that a bank was flying her up to Seattle to deliver the next month. So it was my chance to return the favor and I shared some of my story-telling tricks.

She’s got a seriously great message and I won’t tell it here for her You can check her website for that. But when I think of her I’m reminded of the that Terrance McKenna quote that starts with ‘Nature loves courage.’  It’s not as if we all must quit our jobs to cycle around the world, swim across oceans or climb mountains to be fulfilled. But people like Hera remind me of a notion that deep down we all have a voice. The voice that’s quietly and insistently speaking our truth and telling us our purpose. Stopping the mind chatter and letting go of who you think you are long enough to hear that call, takes one kind of courage, acting on it yet another.

Now there’s a film. It’s called pedal and it’s doing a tour of the world. You can even sign up to watch it here. Check it out. 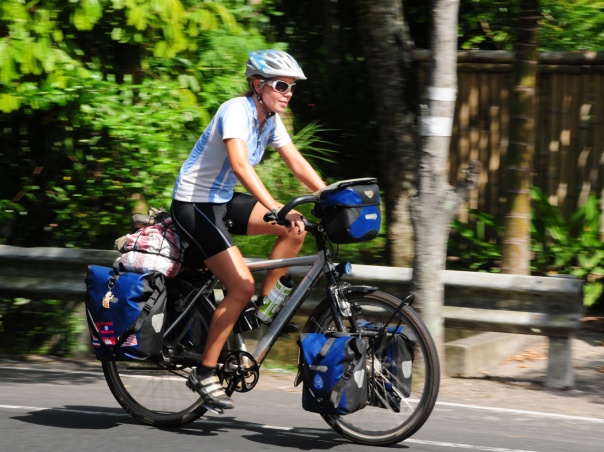